About staff member in Shibuya①

How I became a member of Wander Compass Shibuya

My name is Kana. I am a member of Wander Compass Shibuya. I help tourists by giving them directions, suggesting where to see, what to eat or sometimes trying to find things they lost on the train or in Shibuya. I enjoy it so much. Actually there are three Kana at our information office. So I’m called by my nickname, Kanayan.

I went to Canada right after I graduated from high school. I lived in Victoria to study English for a year and half. I had always been interested in studying languages since I was in elementary school. I didn’t have any particular reasons why I wanted to study English. I just thought it would be so cool if I can speak English. So I started listening to English music and watching movies and tv dramas when I was in middle school. Another reason was that because I grew up in a kind of countryside, when I thought about what I want to do for a living, there wasn’t one job I wanted to do in my hometown or a person I wanted to be. There was no way for me to spend my life there. When I was in high school, my mother suggested I join a 10 days homestay program during spring break. That’s when I first went to Victoria. I really loved that city and wanted to come back after finishing high school.

Then after graduation, I went to English school in Victoria and met many friends around the world. It was such a great experience. Everything was different and there was no one I knew. Living in a different country, eating different food, taking classes in English and hanging out with friends from different countries, all these new experiences which I couldn’t have gained in Japan made me much more confident.

Since I came back to Japan and moved to Tokyo, I have been studying Spanish by myself little by little. Then last year, I decided to travel to either Spain or Mexico. Both are Spanish speaking countries and both I have friends there. I chose Spain. Even though my friend lives there, I wasn’t brave enough to travel Mexico alone with my poor Spanish. I visited 6 cities after visiting my friend in Asturias. It was my first time to visit a country in Europe. There was a lot of historical architecture including university, palace and cathedral. Those were something I had never seen before. Everything I saw in Spain was beautiful. I really liked the food too. But the best part was that I met new people who I wouldn’t have met at all if my plans had been a little different. I was impressed by the odds of the people who all have different backgrounds and reasons to visit Spain meeting at one small hostel.

During three weeks of my trip, I slept at several dormitory rooms at hostels. I met new people at each hostel and we went to eat out and talked about our own background. That reminded me of my days in Victoria. At the same time, it made me feel like I want to be back to this kind of life where I constantly meet new people from overseas and get to know each other. I am thinking that someday I want to go back to Spain to study Spanish even for a couple of months. 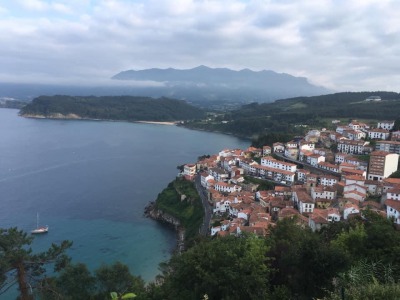 Before I joined Wander Compass Shibuya, I worked at a ryokan which is a famous but small hot spring district in a mountain in Nagano. I was curious about what it’s like to live on a mountain. There is no convenience store or supermarket within walking distance.

I worked there for three months and I had some guests from other countries. At the time, I was the only staff member who spoke English. Giving a tour inside ryokan, showing them a room, serving meals and explaining about each dish were my job. It was not easy, especially telling them about dishes was hard, which were not just regular food or vegetables that we can find at supermarkets in a city. But it was worth the challenge. The guests from foreign countries were very interested in many things. It was so fun introducing Japanese culture and food including what kaiseki ryori is or how the dish is cooked. I was not the one who was traveling but helping them traveling felt like I was. I was so glad to be a part of it. I thought it would be so fun if I work for tourists and get involved with the Tokyo Olympics in some way. All those experiences brought me where I am now. Thank you so much for reading about me. When you come to Tokyo, please come by so that we can give you some ideas in Tokyo. I am looking forward to meeting you in person at Wander Compass Shibuya.

I'm Kana. Call me Kanayan. I like eating, reading and traveling. I like anything sweet or spicy. My favorite cuisine is Thai food.